There are places on this earth where time stands still.  Most of those places in my world are tiny pockets of seclusion, hidden for a while from most, known well to a few.  They hold trout, snowshoe hares, pine squirrels, and blue grouse.  The barren ridges above the streams have provided my family with lean, red meat from elk and mule deer for decades.  They sustain, nourish, and renew.  They are, and forever will be, my stomping grounds. 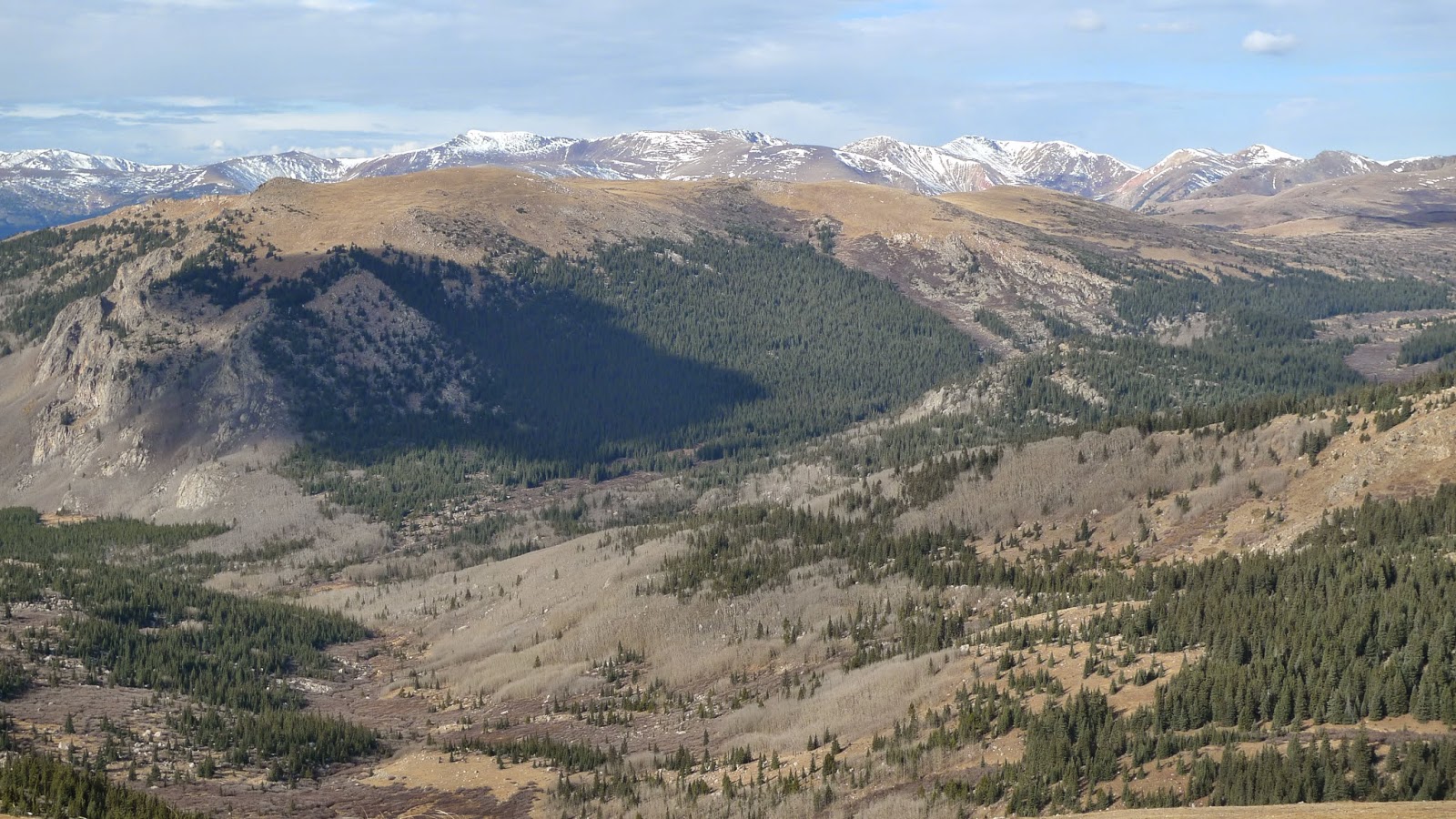 The Stomping Grounds, as seen from the east from 12,000 feet.  Our camp is at the center of the photo. 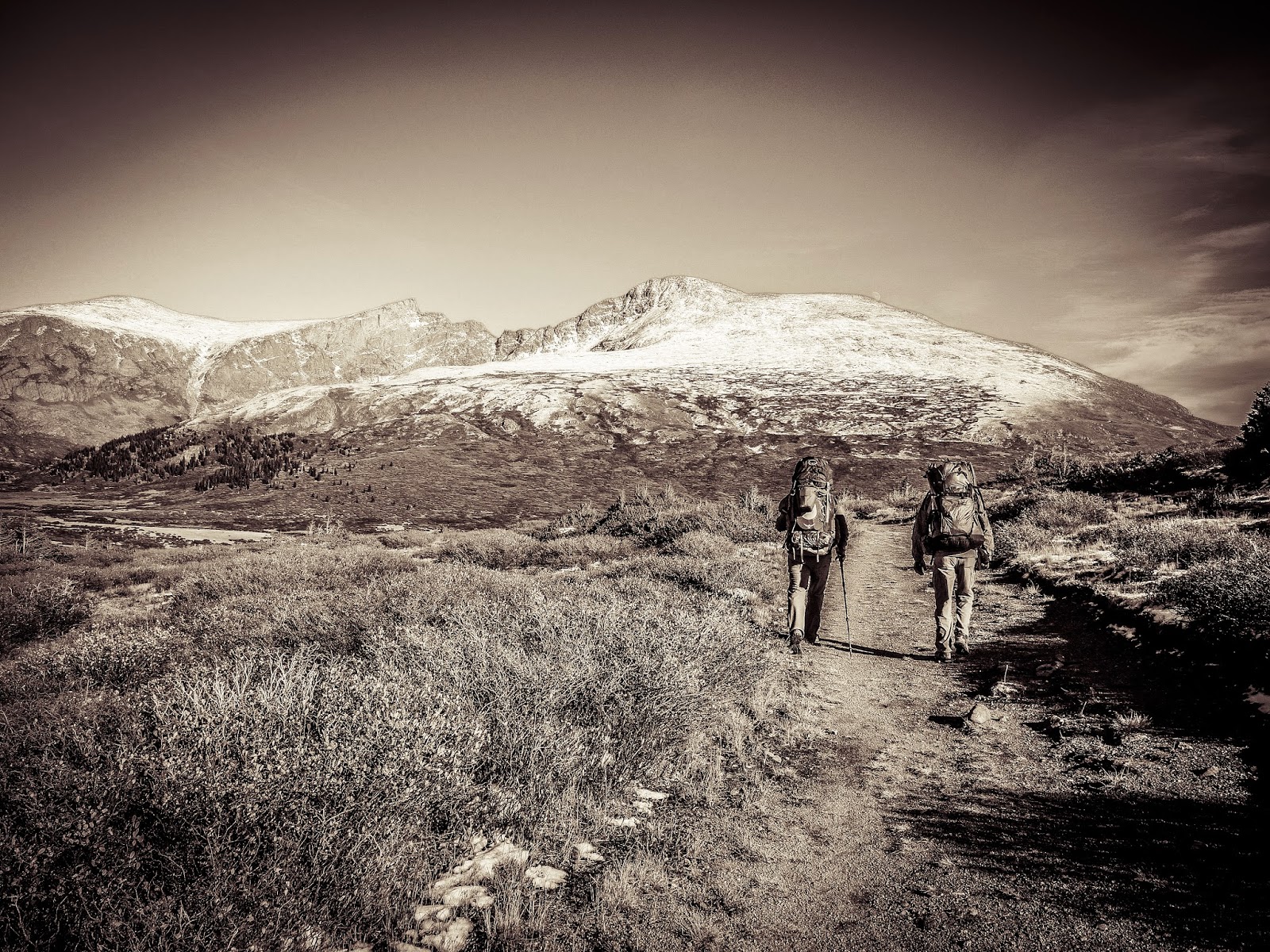 Steve and I, heading south toward our camp. 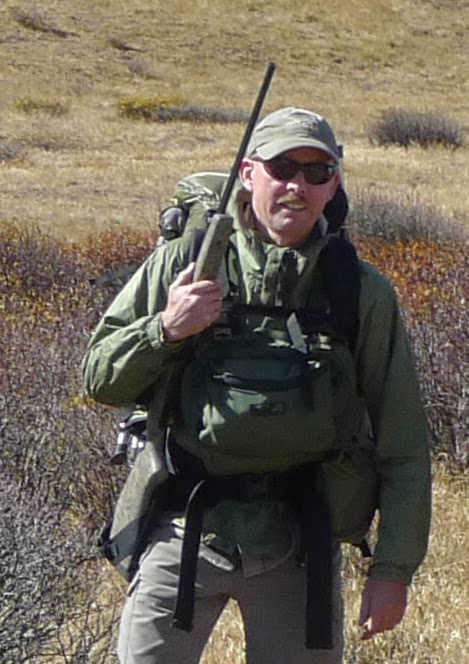 I come here each year for an extended weekend that falls just after the Colorado archery big game season draws to a close at the end of September, and just before the first big game hunting season begins for hunters toting guns, of which I’m one.  It’s usually the first full weekend of October.  A bittersweet time of the year here, when the aspens have mostly blown off all of their little golden pages, but a few weeks before snow starts to pile up faster than it melts.  Autumn is a fleeting season at 11,000 feet. 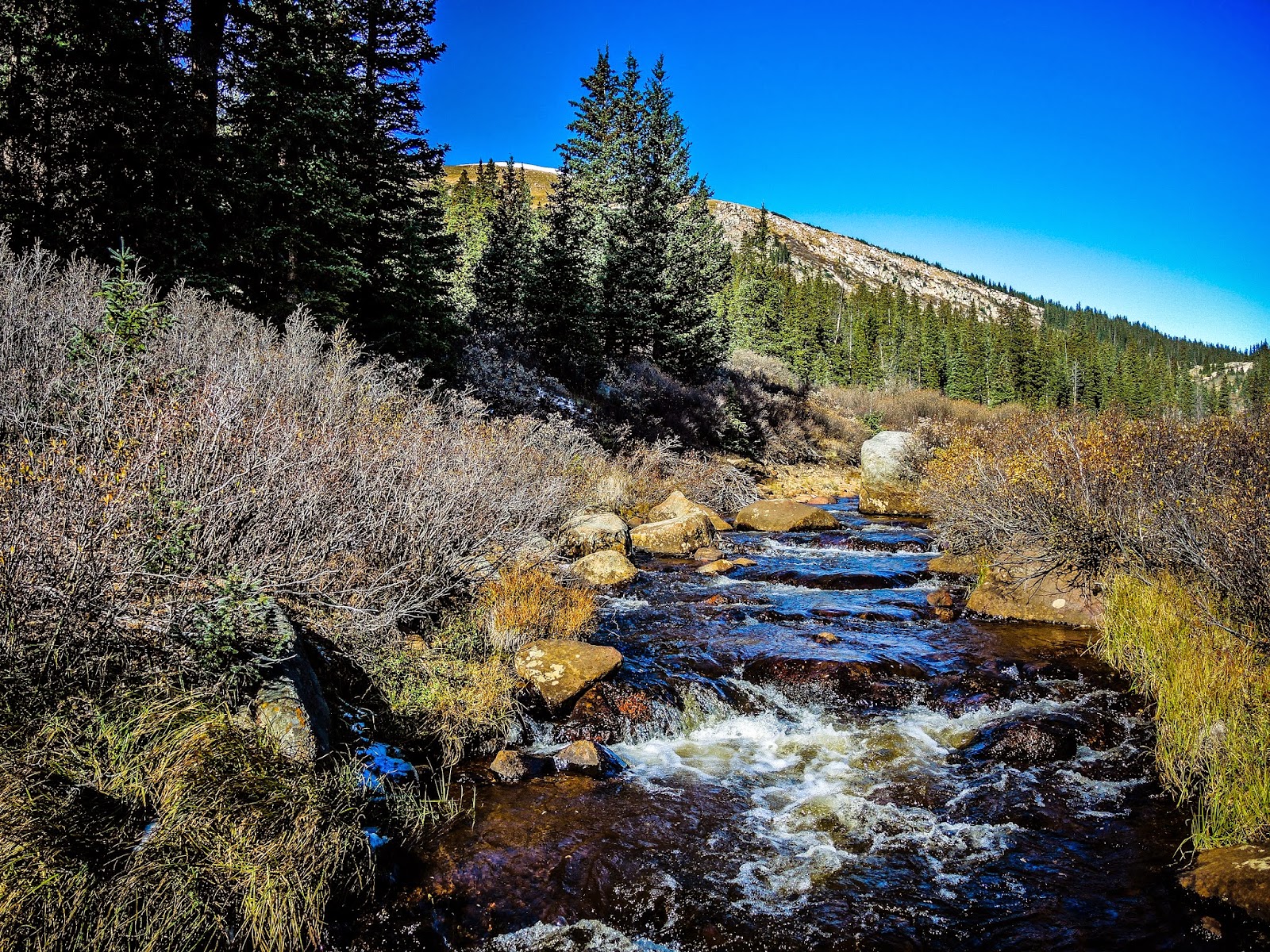 This year’s Surf ‘N Turf Weekend came and went like a swirl in the wind.  It came fast, twisted and spun quickly, and then blew on past like the dead aspen leaves it picked up and scattered while I was there…just like it does every year.  This narrow window between my summers spent guiding tenkara trips in the San Juans and a month of time between mid-October and mid-November securing a year’s worth of venison, signals the onset of a dead and decaying world in the backcountry with autumn, and the bone-cracking cold and stillness of high-country winter. 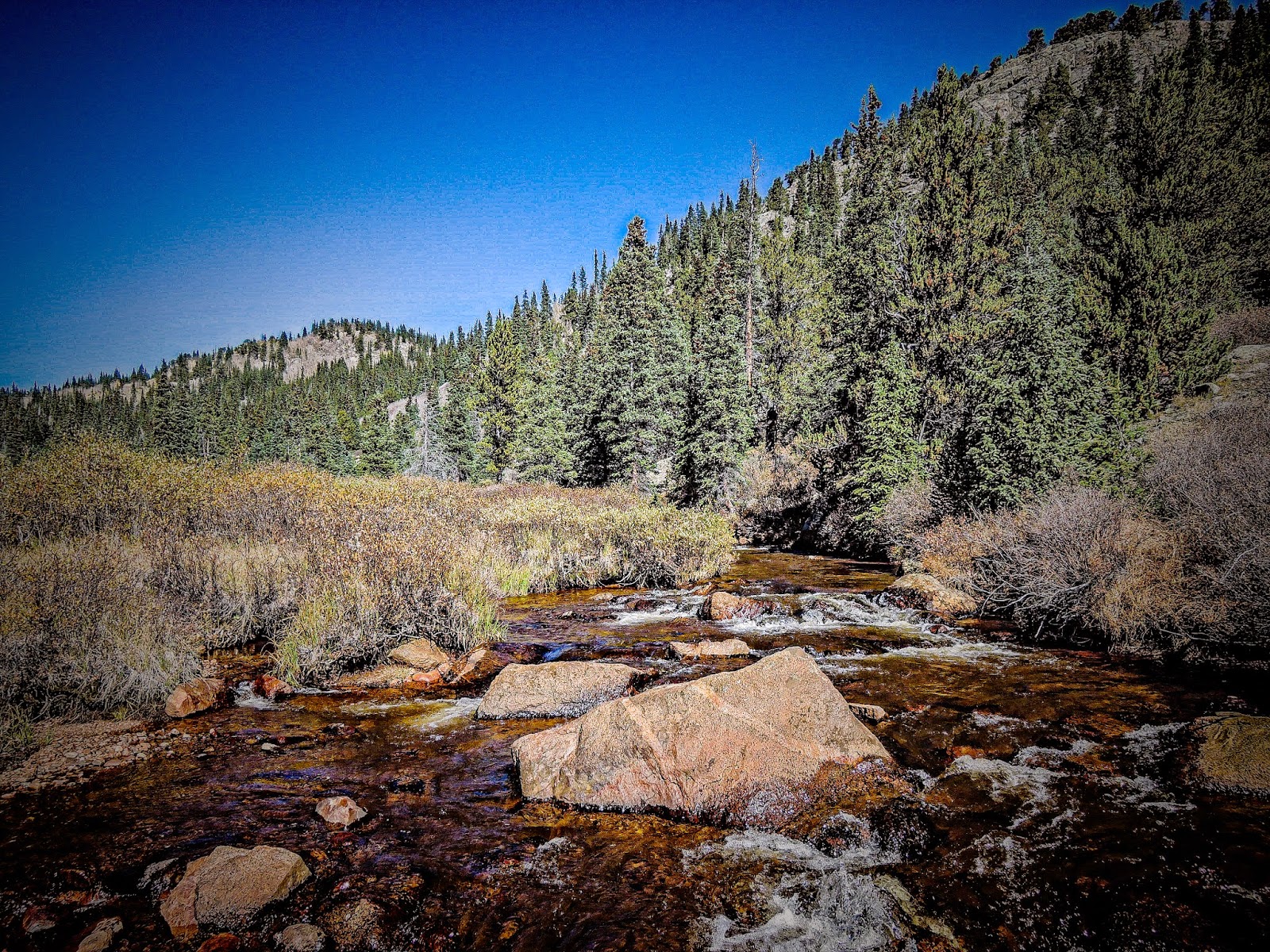 We usually have a knot of three or four close hunter-angler friends at our Surf ‘N Turf Weekend.  Friends who backpack, hunt, fish, and shoot together at various gatherings throughout the year, all lifelong friends, all with much in common.  This year it was a bit different.  The wrinkles of life kept the usual cast of characters from attending.  Instead, I was pleased to share my camp with a husband and wife who had been former clients of mine on a guided tenkara trip.  I had only known Steve and Melissa for a short time, but I already knew we were kindred spirits.  Nevermind that Steve and I had both spent time in the Army, he a young armor officer, me a twenty-year career NCO, with service time that overlapped during Operation Desert Storm.  Beyond that, I knew that both of them were experienced backcountry muscle-powered travelers, and I also knew that they were open-minded enough to understand and embrace the significance of killing and eating to sustain yourself in the backcountry.  I think we understood each other. 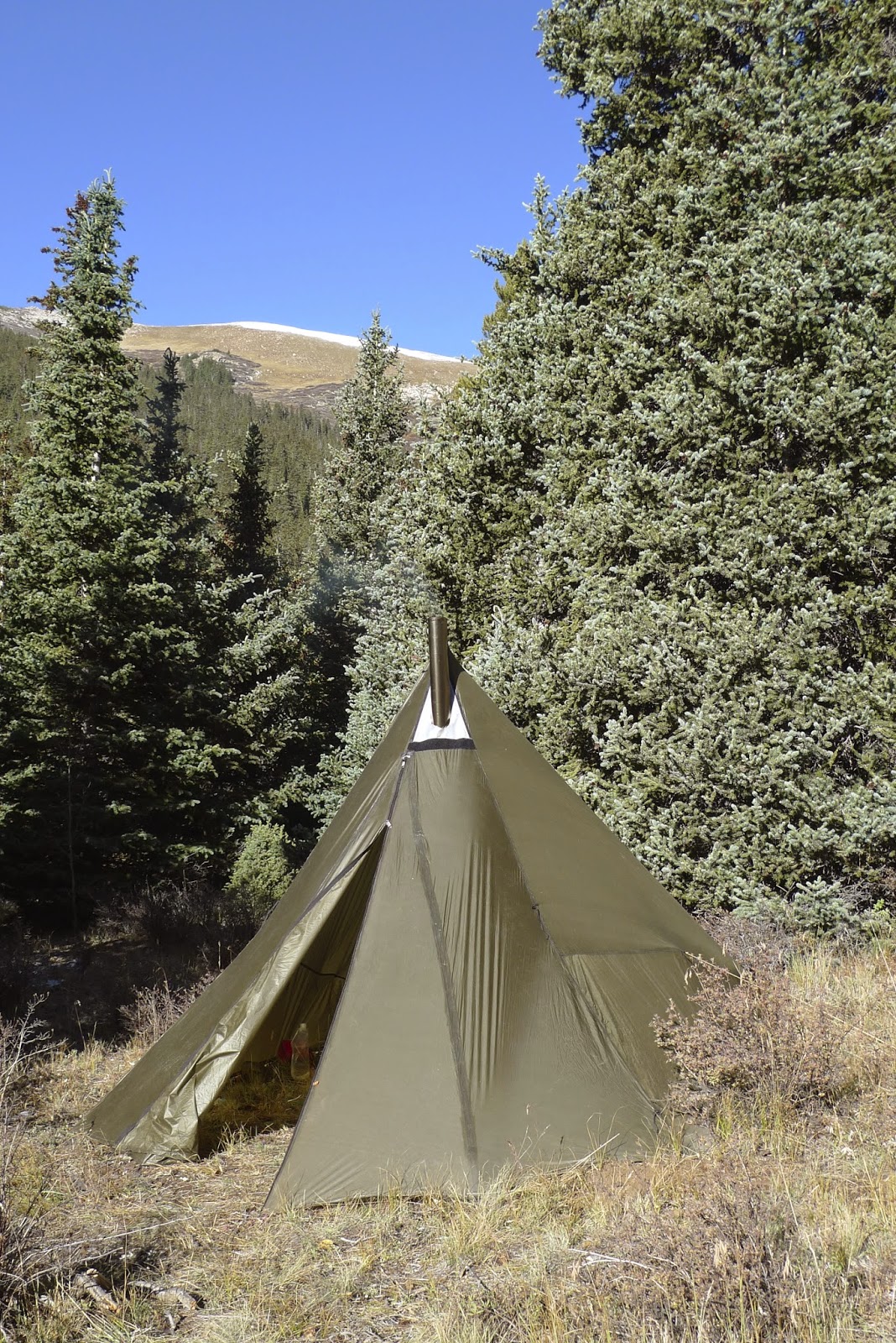 Our weekend was spent exploring the stream near camp, where we had pitched ultralight shelters.  While Steve and Melissa tried their luck with reluctant brook trout, I hiked up the ridge to the north to search out pine squirrels and snowshoe hares.  I had two hares sneak by me, circling around to my left each time and running behind me.  Over this weekend each year, I can usually take a couple of hares easily, but this year there weren’t nearly as many in the woods.  I was able to hike up to the saddle on the ridge and nail down a pine squirrel to take back to camp for supper.  I was hoping there were trout on the stringer from my partners. 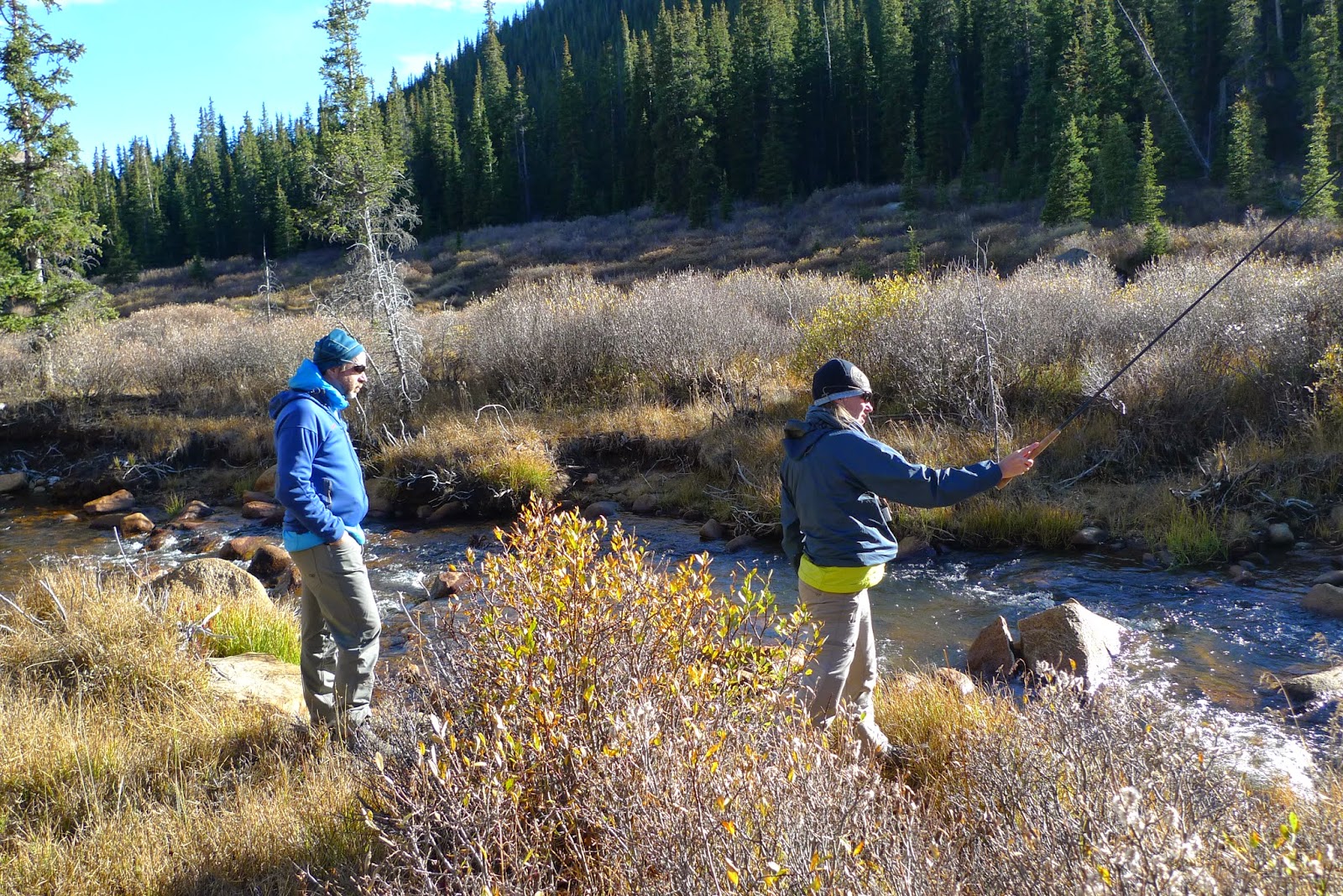 Steve and Melissa, prospecting for brookies near camp.

Steve and Melissa hadn’t caught any trout, so I stashed the squirrel and headed straight back upstream to a spot I knew would give us the “surf” in our Surf ‘N Turf Weekend.  We already had the “turf”…our squirrel.  I hiked upstream above a steep section of waterfalls to a flat bend in the creek.  There I caught three absolutely beautiful brookies, all about nine inches in length.  All with orange, white and blue. 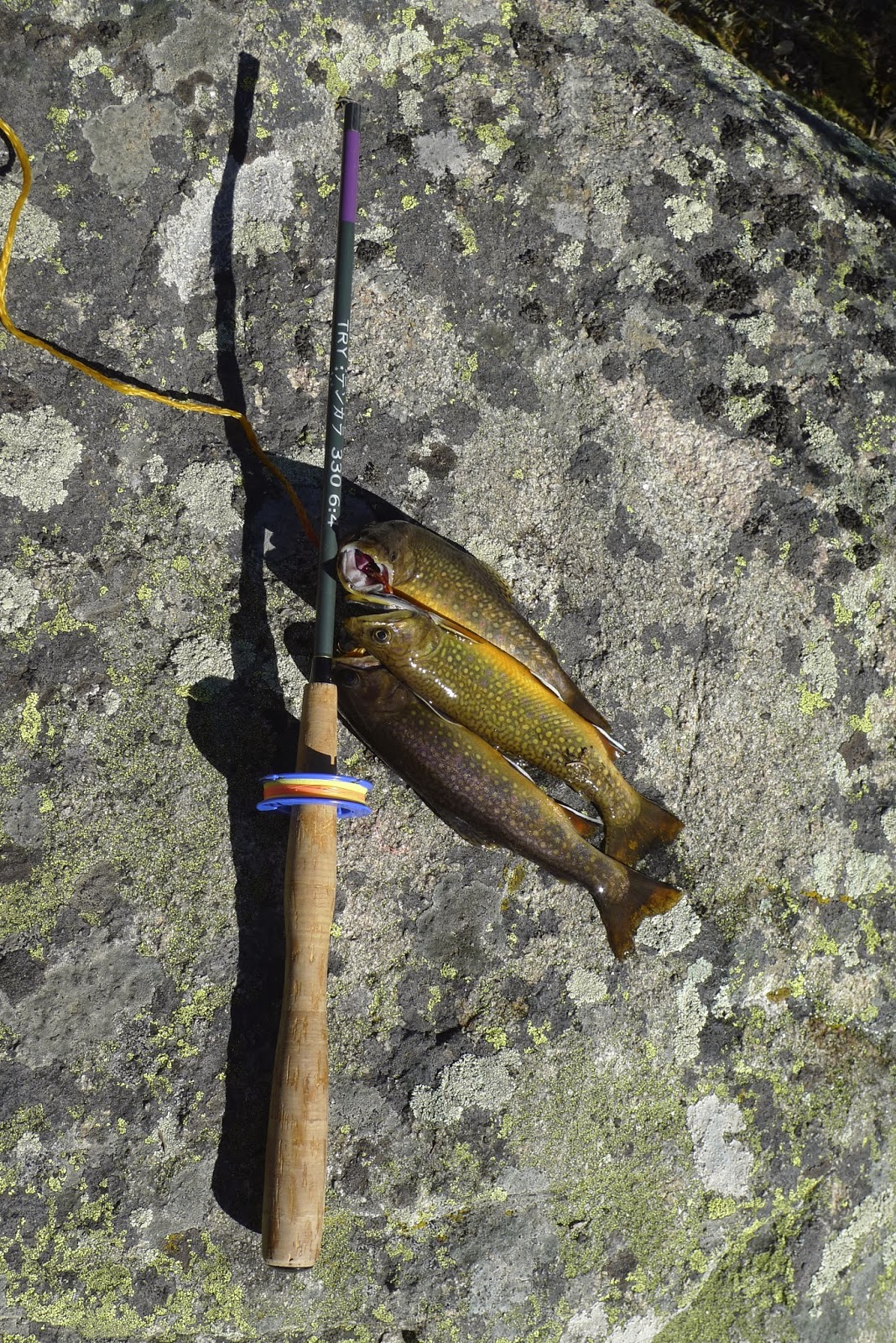 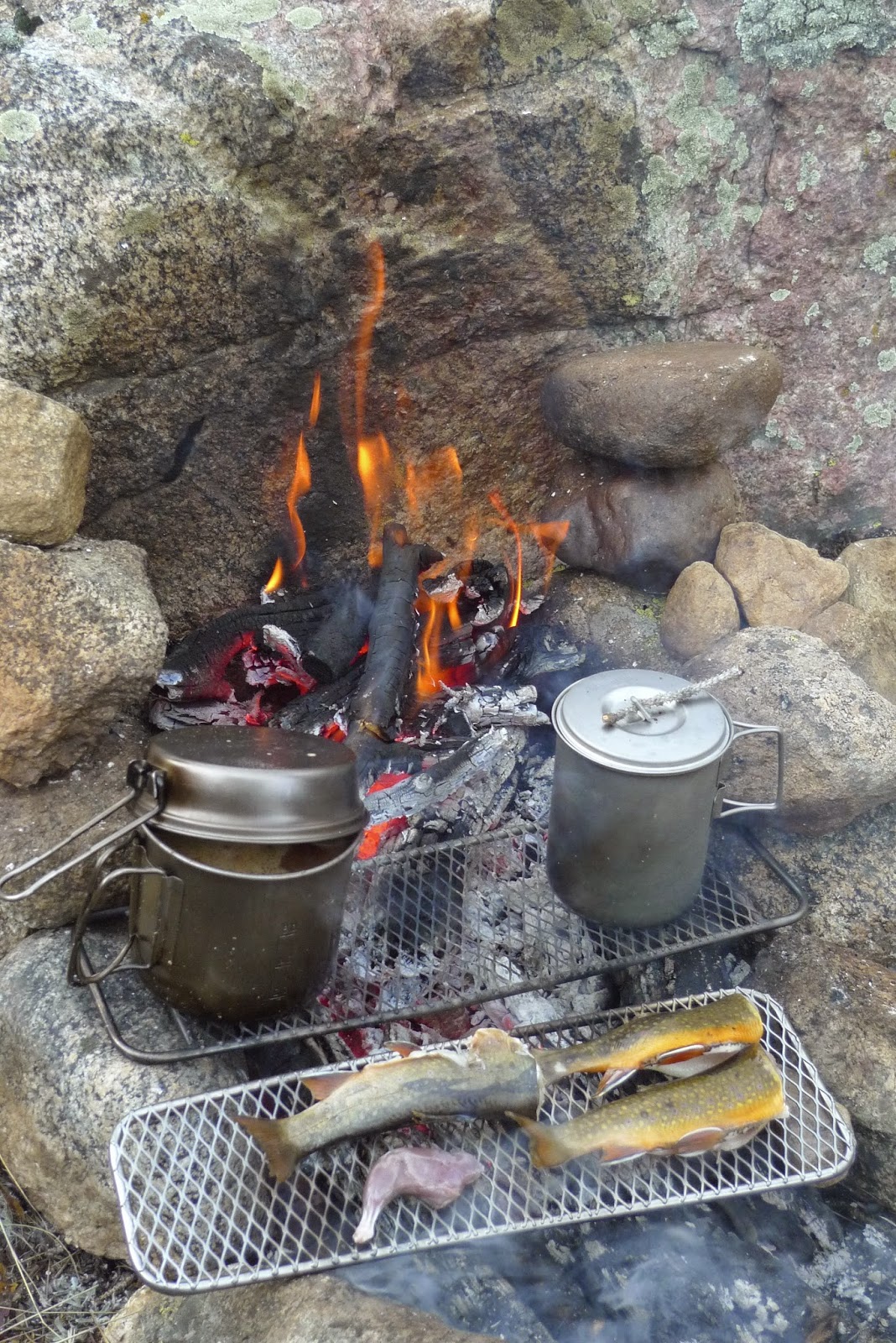 Surf 'N Turf in the boonies…brook trout and pine squirrel roasting, while red beans and rice and tea simmer on the coals. 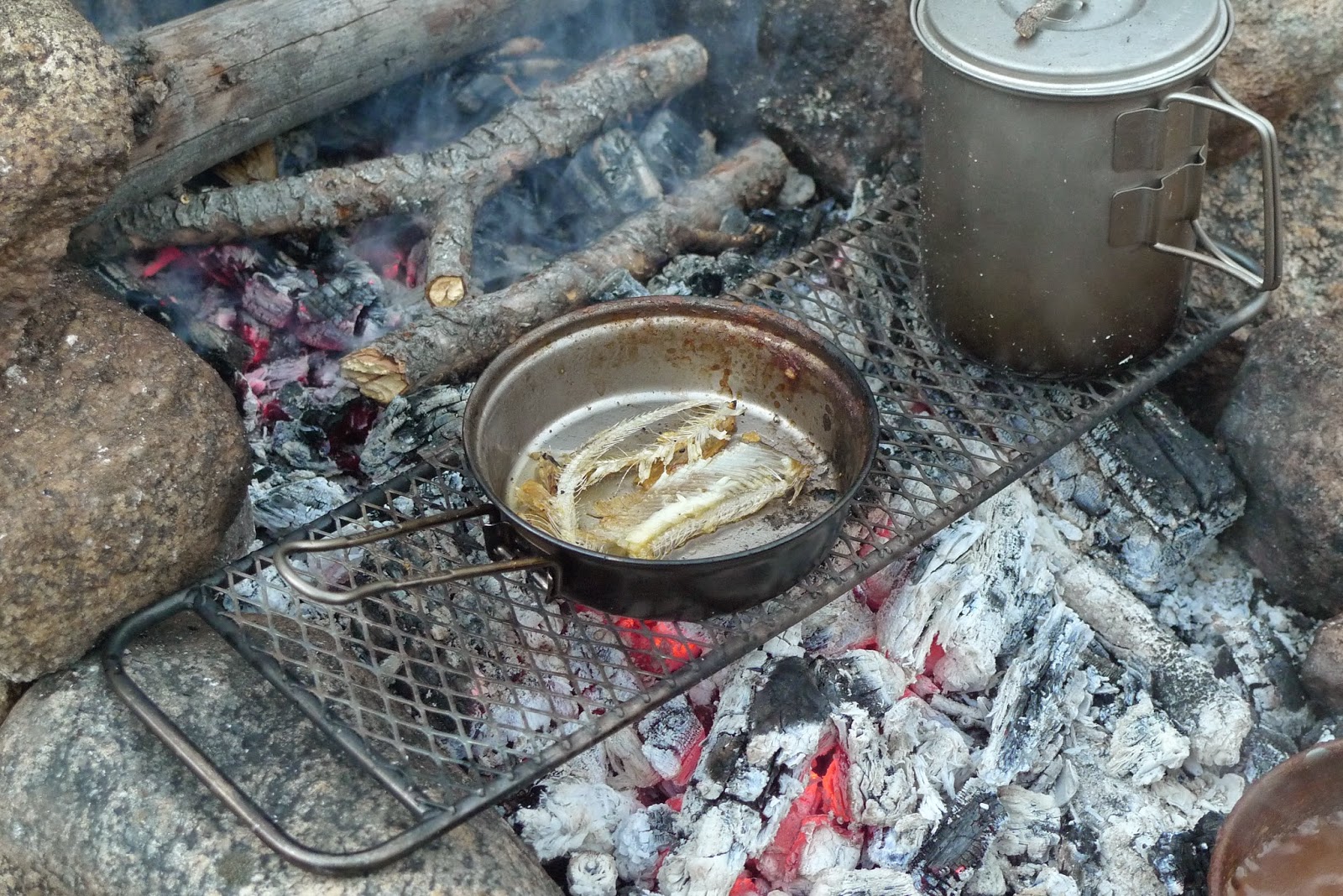 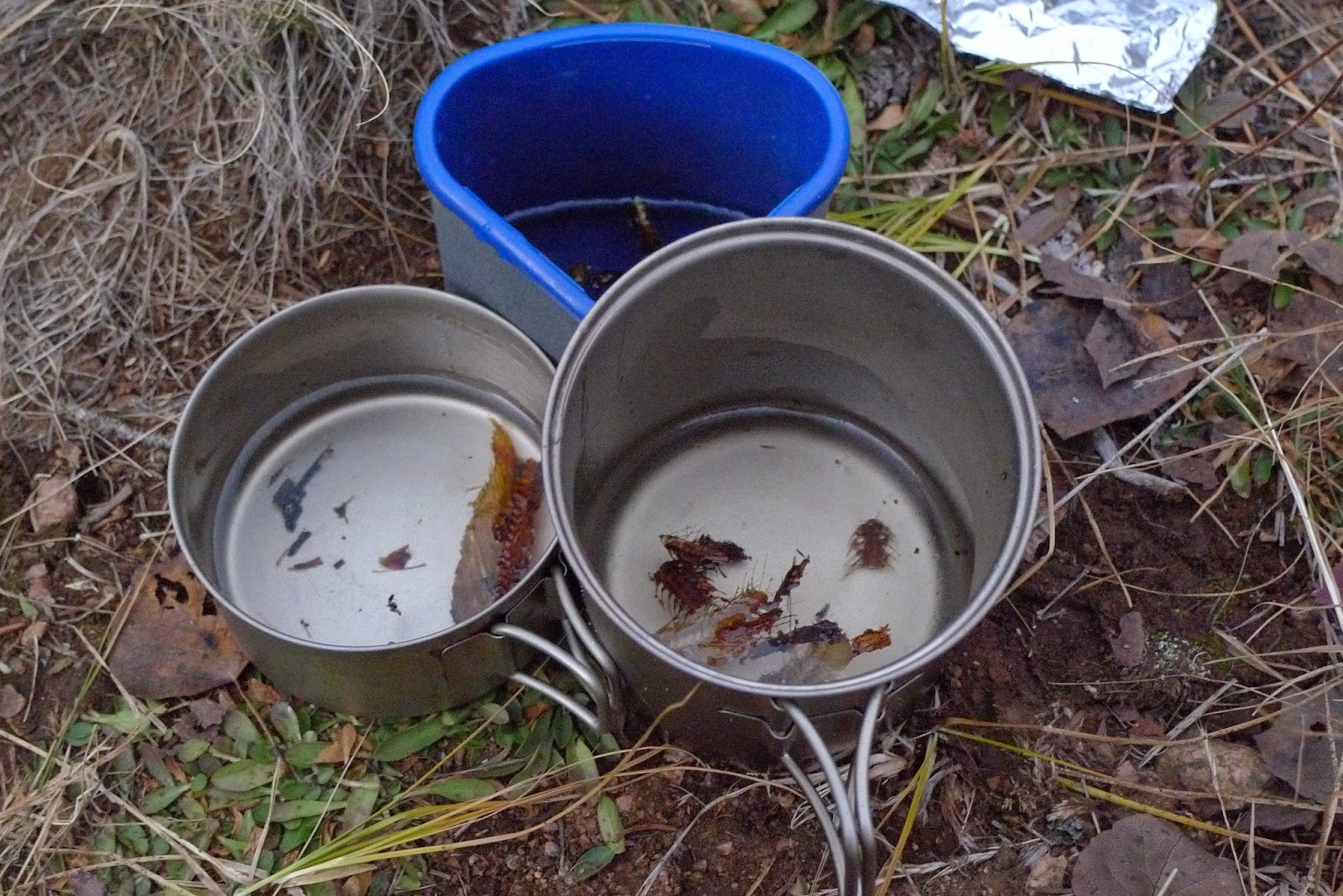 We spent good time around our open cooking fire, roasting up trout and squirrel.  As soon as the sun sank below the mountain to the southwest, the mercury dropped quickly.  We retreated to my woodstove-heated shelter and talked about everything and nothing at once.  This was the most intimate of these weekends I’ve had, and I really enjoyed sharing it in my shelter on a cold night with two very good friends.   Steve and Melissa will be forever welcome in my camps.

*Many thanks to Stephen and Melissa Alcorn for sharing their photography with me for this blog post.  You guys ROCK!

Posted by Paul Vertrees at 8:15 PM No comments: