I Can Smell Spring

I sincerely hope I’m wrong, because we need way more snow in the southern Colorado foothills than we’ve gotten so far this winter, but I don’t really think I am.  I can smell spring.


Actually, I can smell the Arkansas River.  I smelled it yesterday.  You see, I do very few things in life, but the ones I do mean a lot to me.  Family, hunting, backpacking, backcountry skiing, tenkara, and…running.  I run often, mostly on trails, to keep my nearly 50-year-old body from getting big and soft.  I run to connect with the paleolithic past when folks had to run to survive.  I run because it makes me a much better hunter and angler.  I run to clear my head and think.
One of my favorite places to run is along the Riverwalk in Cañon City.  I ran there two days ago while the sun sank in the western sky and the shadows grew longer.  I smelled spring.  Nothing in this world smells like that trail along the Arkansas River just before spring comes.  It smells slightly fishy, it smells like rotting cottonwood and water birch leaves, it smells like the thawing of riverside mud.  When I run along that trail I get to look at the water that holds those wonderful brown trout, and I get to breathe deeply while my heart, lungs, and legs do the work. 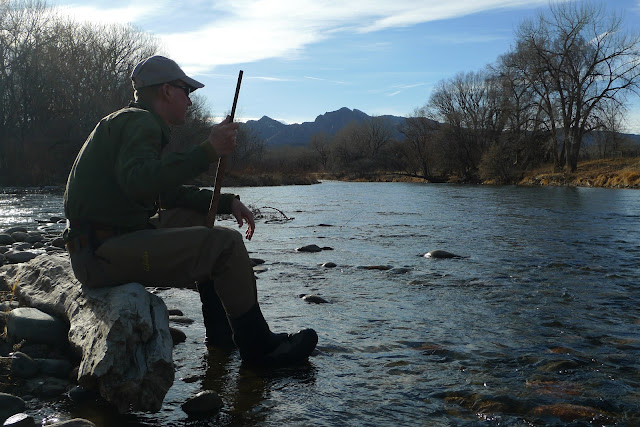 Spring isn’t here yet.  There are still patches of snow in the shady places and a skim of slushy ice or two across the Riverwalk.  It'll still snow a few more times.  But I can smell it, and it’s not far off.   I think I’ll go fishing tomorrow.
Posted by Paul Vertrees at 7:52 PM