Field Journal Entry (September 6, 2015)  I forgot to take my headlamp out of the truck and stick it in my waders.  It’s dark, it’s 8:00 PM, and I’ve stumbled my way back upriver to where I parked along the highway.  I got to the boulder garden at 5:00 PM, threw a hopper-copper-dropper rig for two hours with a 12-foot floating line, switched over to a single hopper pattern for the last hour, and caught around twenty browns.  I didn’t count.  This is what September in the canyons is all about!

Over the past 30 years or so I’ve come to realize that there are very few, if any, absolutes when it comes to fly angling.  However, there ARE some things that work undeniably well, and John Barr’s three-fly system, the hopper-copper-dropper (HCD), is one of those, and there’s no reason why this can’t be done with a tenkara rod!  There are times and places for going trad, and my full-flex rod, 3.5 level line, and eyeless sakasa kebari patterns are what I go for.  Some days I’ll fish that way with only one pattern, and it’s very enjoyable.  Then there are other times and places when it’s equally enjoyable to test the capabilities of a tenkara rod.  That’s what this article is about.

In an article on flyfisherman.com I read a while back, co-written by Barr and Charlie Craven, they had this to say about the HCD…

“Barr’s three-fly method removes most of the agonizing gamble that comes with deciding what trout might choose to eat on any given day and where. John Barr, who conjured up the solution from his tying bench in Boulder, Colorado, calls it the ‘Hopper-Copper-Dropper’, an alliterative way to describe a setup that is as risk-free as angling ever gets.

Barr didn’t invent the three-fly method. Anglers have been tossing–and tangling–multiple-fly rigs for years. But he has refined that approach into a system that has not only proven itself on Colorado’s hard-fished waters but around the United States.”

I’ve been pushing the envelope of what tenkara is capable of doing for quite a while, so I thought why not give the HCD a try?.  I’ve basically taken the “traditional” HCD used by western fly anglers, refined it for use with tenkara, and the results couldn’t have been better!  This isn’t an approach for ALL mountain water, but it is an approach for a LOT of mountain water, especially if your personal adventures take you to rivers like the Arkansas, my local “big” river.

A classic (western) HCD setup includes a #10 BC Hopper strike indicator/top fly, a relatively heavy  #14 Copper John dropper, and a smaller midge emerger, caddis pupae, or baetis emerger bottom fly.  I started out with the pattern sizes that would be used with a typical 5 or 6 weight western fly rod, and found them to be too big.  So here’s one tip…go down one size on all three, if you can.  This will make the three-fly rig a little more wind resistant when casting or when it’s windy, and it’ll work with the more flexible tenkara rod (more on rods later).  Here are my favorite HCD-Floater combos for tenkara:

The HCD-Floater method works best with a floating line, and RIGS FLY SHOP MAKES THE BEST ONE OUT THERE!  Yeah, I’ve got it, I work for RIGS, but they don’t pay me to push lines.  The RIGS lines speak for themselves, and we sell a ton of them, and for good reason.  I’ve taken the RIGS floating lines from the San Miguel, Big Cimarron, and Gunnison all the way home to the Arkansas.  They just flat out work for the HCD-Floater system (among others).  Here’s why.  First, these are (in the tenkara world) big, brawny rivers.  Most native flows are around 400 CFS in the shoulder seasons, and the water is often 75 feet across.  The wind almost always blows, especially in east-west running canyons like the Colorado and the Arkansas.  You need a line that’s functional in the wind, floats so you can drift that big, floaty hopper drag-free, and one that can effectively cast a relatively heavy three-fly rig.  The line material on the RIGS lines makes all of that possible, with a buoyant, comparatively heavy line.  The addition of a tippet ring makes threading tippet and changing out tippet material infinitely easier.  As a guide who threads a tippet ring hundreds of times each season, I find that a selling point.  As a middle-aged man who wears bifocals constantly, I find that a selling point!  The addition of a large connection loop and an in-line high-vis strike indicator make this a highly functional line for non-traditional tenkara.

With the largest usable tippet for tenkara set at 5X, that’s where I start from the tippet ring on the line down to the top fly.  I use mono for this section of tippet.  I use flouro tippet material from the top fly down to the first dropper, staying at 5X.  The section from the first dropper down to the second gets 6X fluoro.  Going with fluoro on the bottom two sections of tippet keeps visibility down in the water, and fluoro is both denser and stiffer, which helps turn the cast over better than with mono.  I will typically run around 5 feet of tippet from the line down to the top hopper/indicator fly.  The droppers are each run about 16” below the preceding fly.  So, from tippet ring to bottom fly, this setup is just shy of 8 feet in length.  Add a 12-15’ floating line into the equation, and you have 20-23 feet of line from rod tip to bottom fly.  That’s a lot for a tenkara rod to handle, and you really need the right rod to make this work best.  Rods are next.

The rivers are usually “big” on the tenkara scale, the canyons are usually windy, and the HCD and floating line are comparatively heavy.  You don’t want to take a 5:5 level line tenkara rod on a trip like this.  What you DO want to take is a rod that flexes toward the tip (a stiff 6:4 or a 7:3) and is at least twelve (360cm) feet long.  Rods that have performed well for me fishing a HCD on a floating line are the venerable Amago by Tenkara USA, the beautiful Nissin Zerosum 400 7:3, and my current favorite, the now-discontinued (but still available, if you look hard) Daiwa LT39SF.  I much prefer the lighter weight, better balance, and casting performance of the Daiwa, although my Amago sure did catch a lot of browns on the Arkansas.  In a pinch, the Iwana by Tenkara USA would do, and if you have the Daiwa LT36SF it would do even better.  Both rods are a little short at twelve feet and 390 centimeters respectively, but they’ll work.  I think you get the idea…a 12-foot-plus, tip-flex rod.

You’ll need a rod like this because of the weight of the line and flies, and the ever-present wind.  A mid-flex rod simply can’t keep up with either very well.  A third factor that a tip-flex rod will handle better is current.  Bigger water means heavier flows, and turning a 16” brown trout in 450 cfs water takes a robust rod.

Casting an HCD-Floater rig requires a slower cast, a little more pause at the end of the backcast, and a bit of a push going forward to deliver it to the water.  It’s not complicated, but it’ll take a few casts to get in the groove.  Once you get in that groove, it’s pretty easy to nail the same seam, the middle of the same big pocket, or the mid-current glass that you’re aiming for.

Well, there you have it, non-traditional tenkara at its best.  Some may even say that it’s not really tenkara.  Matters not to me.  What I do know is that I’m using a tenkara rod, and it’s a whole lot of fun!  So, if you want to experience the possibilities of non-traditional tenkara, or love fishing the HCD with a western fly rod and want to try it with a fixed-line rod, give it a try! 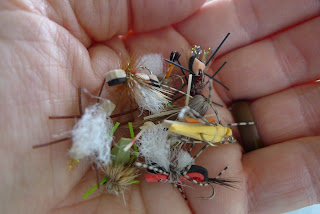