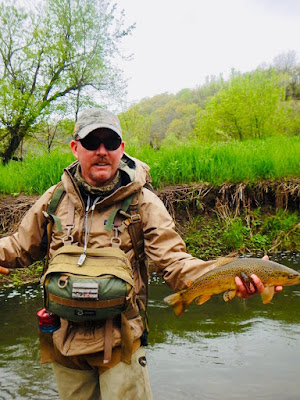 Spring and fall are my favorite seasons here in the canyons and the southern Colorado Mountains I call home.  This spring was one of cool weather, lots of snow in the mountains, tenkara in the local canyons, and one of the most perfect turkey hunts I've ever had!

I started poking up into my canyons as soon as the weather permitted this spring.  One day in February I hiked down into one particular canyon with about a foot of snow on the ground to find miles and miles of the creek frozen completely over.  It's always comforting to know that below that ice in the deep bend pools there are brown and rainbow trout holed up for the winter in their near dormant state, waiting to see the sun slant through warming spring water.


Once the ice melted as the spring sun rose above the canyon walls, I started fishing.  This was in early March.  I was always fishing double nymph rigs then, with a lightly weighted baetis/midge setup.  As usual, this was all done with a tenkara rod.


I've always said that April/May and October/November are my favorite months in the canyons.  This April was superb, and I even started to see some #18 tan caddis come off around the middle of the month.  Once that happened I switched to my spring nymphing rig, consisting of a #18 caddis pupa and a #20 black RS2.  This combo worked on dozens of fish during the month of April, and I continued to cast that rig with my Tactical Tenkara Nymphing (TTN) line with a newly acquired Dragontail Komodo rod.  That rod proved to be a really nice small water rod this spring, and worked very well with my line and lightly weighted double nymph rig.  Despite the fact that I saw caddis adults, I didn't see many rising trout at all in April, and only fished an adult dry caddis pattern a few times with limited success.  I also fished a #20 adult blue winged olive a few times too, with the same limited success.


April has long been a favorite month in the woods as well.  I've been hunting wild turkeys for over 30 years, at first in the longbeard mecca of northern Missouri, and later in my home state of Colorado.  I had recently gotten permission on a large chunk of private land in northern Fremont County, a 40-minute drive from home.  I was very familiar with this area and the surrounding public land, and the addition of my new hunting spot was a godsend.  I can't express enough thanks to the landowner for his generosity and hospitality.  After some initial scouting which resulted in locating a good number of birds, I made a plan to take Friday, April 19th, off from work.  Awake at 3:30 AM, I was on the road by 4:00.  Forty minutes later I parked by the old barn, threw three decoys over my shoulder, grabbed my shotgun, and walked a half-mile north.  It was bone-chilling cold and windy...not exactly ideal for turkey hunting at 8,500 feet in the Colorado mountains!  I set up in the corner of an old oat field leftover from last year.  I was tucked up under a cluster of Gambel's oak, with the two hens and one jake decoy in the corner of the field, about 30 yards in front of me.  After hitting my owl hooter a few times over the next hour, I failed to elicit any gobbles from the cottonwoods down by the creek.  At around 6:00 am I spotted several hens through my binoculars, scratching in the dirt about 200 yards away.  Then I saw the tips of a fan!  I started yelping with my old slate call, and worked those birds up to my position.  Once the five hens and big gobbler were within about 40 yards the gobbler finally realized my jake decoy was a threat.  He stuck his head out and ran straight for the jake decoy.  That big gobbler fell to a hot load of copper-plated #6, and by 6:30 am my hunt was over.  In every sense, this was one of my most perfect and best turkey hunts ever.  It was one of those times when the planets align, the gobbler comes running to your call and decoy, and goes down hard.  I can really only remember one other hunt, many years ago with my good friend, Randy, when things came together any better! 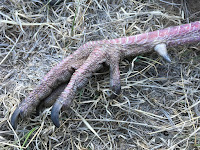 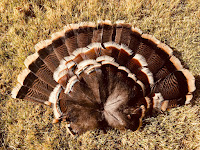 May arrived with anticipation!  The flows in the canyons were much better than they were last year, and the sweet spot of 25-35 cubic-feet-per-second became a weekly event that lasted several days.  The browns and rainbows that had been stacked up in the deepest holes, covered with several inches of ice all winter, started to move and spread out in the bend pools.  As of today, the fishing has only gotten better each week.  There are still very few blue winged olive or caddis hatches, but around 9:00 am each day there's a sporadic BWO hatch.  Regardless, the browns and rainbows are eating #18 beadhead pheasant tails and #20 mercury flashback RS2s with abandon.


May also brought the fourth annual Tenkara Wisconsin Driftless Campout on my birthday weekend.  My good friend and frequent traveling partner, Shawn Larson, and I flew to Minneapolis on May 16th and got home late on the night of May 19th.  There will be much more on that on what will be the first ever episode of Tenkara Tracks Podcast in the next month or so!  You'll have to tune in, and I think you'll be entertained and will learn a few things by listening to the show.  I'll have several guests join me who attended the campout! 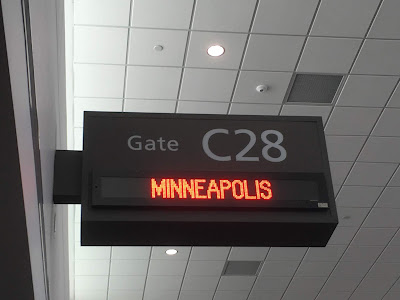 We had a late, cool, wet spring here in Colorado.  As of today, June 6th, the runoff is finally starting.  My local canyons have gone from the golden, perfect flow of 30 cfs to just over a hundred.  The headwater mountain range of those streams in the canyons have snow water equivalent of over 360 percent!  It'll be a great runoff, even if I can't fish the canyons for a while.  A big runoff will scour out some of the really good holes that filled in with sand after last summer's flash flooding.  The canyons, and consequently the trout, will be better because of it.

I hope you had a splendid spring, and here's looking forward to a stunning summer!