Of Bullets and Bleached Elk Hair

I long ago converted my office/man cave to a bedroom for our oldest daughter, who greatly deserved her own space in this world as a budding pre-teen.  I don't regret giving her that four-hundred square feet as her own one bit.  These days, I have a corner in our bedroom that serves as the nuts-and-bolts visceral bullseye of my world on the home front.  The dialed-in epicenter of the epicenter is this finely-crafted piece of furniture - THE BENCH.  Here's it's story…

First, I must tell you about Don Wedow.  Don built The Bench, with his own two hands, nearly a decade ago.  Don is also one of the people I've known the longest in this world.  You see, when I was a skinny little kid riding the school bus, through ten miles of mountain roads, to West Jefferson Elementary School in Conifer, Colorado, Don was one of the "big kids" on the back of the bus.  I was absolutely terrified of him, both because he was one of "The Cowboys" (a bunch of rodeo-ing junior high kids who sat in the back of the bus), and because he was the big brother of one of the most beautiful little red-headed girls in the world, Pattie, with whom I attended school. 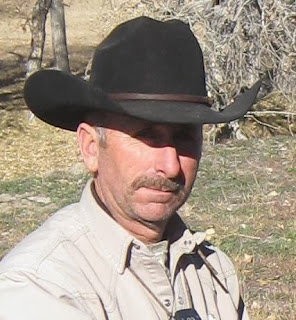 Nearly 30 years after I last saw him, Don resurfaced in 2004 at a backcountry rendezvous in central Colorado, sponsored by my good friend and sensei, Patrick Smith, founder of Mountainsmith, and present-day owner of Kifaru, International.  Don showed up at the remote campout in fine form, complete with a hypoxic rattlesnake he'd shoved into a huge glass pickle jar for all to see in the center of the huge tipi we'd all gathered in.  Typical Don.

Don is one of a tight knot of friends who have my back 24/7.  He's also someone who would do anything for a friend, and he did just that when he built The Bench for me a number of years ago.  He built it for me, no questions asked.  Once he had it built, we moved it to my dad's barn, 30 miles north, for finishing. 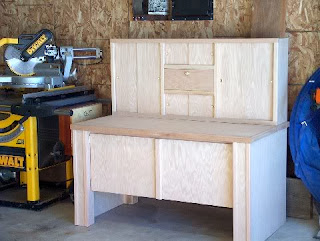 The Bench, unfinished and waiting in my dad's barn.

Once my dad and I had put the stain and varnish on it, I moved it to my "man cave" and eventually to the corner of my bedroom.  It's still here today, ten feet from the foot of my bed, with the antlers of a big 5X5 mulie buck hanging over it, a fly vise on the countertop, my trusty reloading press bolted on, and my Army retirement sculpture on the top shelf. 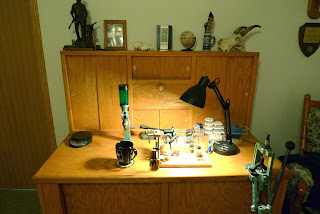 From bullets to bleached elk hair, The Bench is always there.  Always there for the planning, tying, loading, weighing, scheming, and dreaming.  Without it I would be incomplete.  With it I have the heart and soul of the home front.

Thanks, Don.
Posted by Paul Vertrees at 6:02 PM