The Evolution of a Tenkara Nymphing Line


Five years ago I designed two tenkara lines.  It was a long time coming, and it happened after considerable amount of testing, knot-tying, material sourcing, line builds, re-testing, and more re-testing.  It was worth it.  Here’s the story of one of them.

The backstory:  I discovered tenkara, or as I like to say, tenkara discovered me, in 2009.  I was caught in the uptake created by two men…Daniel Galhardo and Ryan Jordan.  Both were tenkara anglers and lightweight backpackers, and both immediately earned my respect and attention.  I’ve often talked about how the real tenkara hook for me was backpacking, and between Daniel and Ryan, and the tenkara rod they collaborated on, the TUSA/Backpacking Light Hane, there was no looking back.  At that time, the only line options I was aware of were furled nylon lines and fluorocarbon level lines.  The first tenkara line I ever cast was a tapered, furled nylon line.  There were a few things it did well for me, and many things it did not.  In 2010, I started casting fluorocarbon level line, which gave me the advantage of much less line surface area, which in turn collected a lot less water.  The water-weighted belly in the furled line was gone, and it was considerably easier to keep the line off the water.  For several years, level line, especially the 3.5 diameter, was my mainstay.

In early summer 2012 I became one of the first professional tenkara guides in Colorado.  Some of the water I ended up guiding on was a stretch of technical tailwater that held huge cutthroats and browns, and some respectable rainbow trout.  All of these fish received nearly constant pressure during the summer months, and I discovered the secret to catching them and getting my clients on them, was getting flies, especially nymph rigs, to the exact depth where the fish were holding in feeding lanes.  Western fly anglers could use strike indicators, with adjustment along the leader, to achieve this.  They were also adding and adjusting weight to their nymph rigs.  This had been standard procedure with western nymph fishing for years.

I initially tried fishing traditional kebari on that tailwater with limited, VERY limited, success.  I simply wasn’t getting my flies down to the trout, and those trout wouldn’t move much to take a fly.  I switched over to proven western nymph patterns, mainly a double nymph rig, and started adjusting my split shot weight.  I even ran a drop shot rig.  Once I found the right depth…BAM!  The light bulb started flickering above my head!  This was working…sort of!

Step two was dialing in my depth.  Once I found the depth in the water column where the fish were holding and feeding, I had a hard time staying at that depth from one drift to another without the aid and bulk of a strike indicator.  I did have a fluoro level line with alternating colors in knotted segments.  Those alternating colors helped, but it still really wasn’t enough.  I came home from a summer of guiding in southwest Colorado to my home water, and on one particularly gloomy, cloudy day on a huge, dark green bend pool on the Arkansas River, the light bulb stopped flickering and flashed like fireworks!  That’s the day my Depth Dots and my weight-forward design came into action.  The Depth Dots gave me a foolproof way to maintain consistency in drift depth, and they gave me another “spotter” along the span of the line to keep track of my drift above the surface of the water, which was effective in low light conditions.


I came home from that day in Bighorn Sheep Canyon and started making prototype nymphing lines.  As a traditional bowhunter, I also took what I knew about the efficiency and power of the weight-forward handmade arrows I had been making for years, and I applied that to my nymphing line.  A weight-forward-of-center arrow carries much more penetration power to its target, and by applying that theory to the 12’ span of a tenkara line I found that I had weight-forward tapered line that could deliver anything, from a single traditional kebari all the way up to a weighted double nymph rig, with finesse and accuracy that required nothing more than a slow, methodical arching cast forward.  In short, the weight-forward taper worked.

Since then, I spent another year testing taper, line diameter, and line length.  I finally arrived at a line that worked really well, and accomplished everything I had set out to do.  After testing the Tactical Tenkara Nymphing line on the Arkansas River freestone right next to my home in Canon City, Colorado, I started traveling and fishing it elsewhere.  In 2016, my friend Shawn and I made a trip to the Alaskan interior, and the TTN line was very effective on trophy arctic grayling and sockeye salmon.  The next year in 2017, I made one of several trips east to the Driftless in southwest Wisconsin, and again the TTN really shined on the crystal clear little spring creeks in the coulees.  I’ve also taken the TTN to challenging tailwater fisheries on the South Platte and Arkansas Rivers in Colorado with great success.  In 2017 and 2018 I returned to Alaska, the Bristol Bay region, to target huge rainbow trout, and again the TTN got the job done.

I now produce the TTN lines exclusively for Royal GorgeAnglers, where I also guide tenkara trips.  It’s truly a blessing to guide for a fly shop and outfitter that has provided me an opportunity to offer these lines to the public.   I really enjoy having total control over the production of the lines, since I hand craft each and every one of them myself.  Without outsourcing the production, I can keep a close eye on quality, and that means a lot to me.  I also enjoy having a direct connection with customers who have questions about the lines, or want to share stories or photos of the lines in action.
In short, this has been one of the most enjoyable and rewarding projects I’ve ever undertaken!  I’m looking forward to many more days on the water with a TTN, nymphing with a fixed-line rod!

Here's a video on my You Tube channel focused on tenkara nymphing...
Small Water Tenkara Nymphing with a TTN 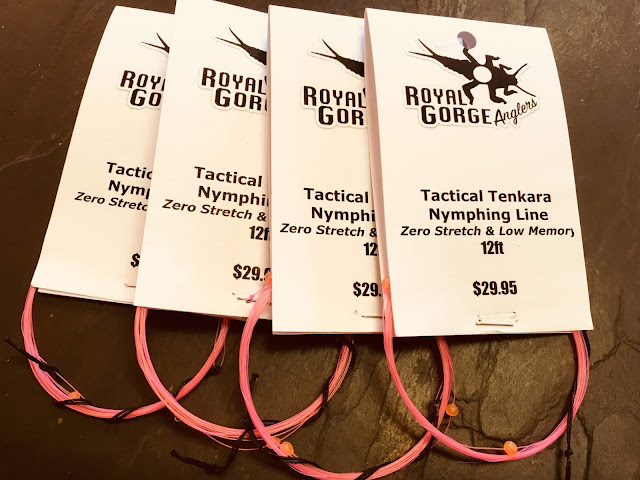 Posted by Paul Vertrees at 7:41 PM No comments: